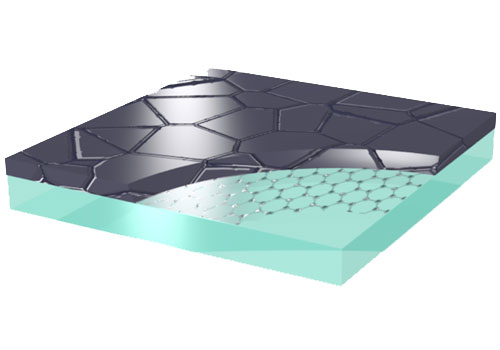 A new study, carried out by the German Research Institute Helmholtz Zentrum Berlin, demonstrated that graphene retains its unique conductivity and transparency even when coated with silicon.

The super-conductivity and transparency of graphene (as mentioned in a previous article on future photovoltaic panels), could make it the ideal candidate to produce super-efficient solar cells: it does not stop incoming light rays and allows electricity to move fast through its carbon atom lattice.

Graphene poses a significant challenge, though: in contact with other materials, it changes significantly and loses its potential.

Hence the importance of the finding of Marc Gluba and Norbert Nickel of the German research institute Helmholtz Zentrum Berlin, who demonstrated that graphene can retain its properties even if coated with a thin silicon film.

“We studied the way the properties of graphene change when it is placed between layers similar to those that make up a thin silicon film cell, and were surprised to see that the change is minimal,” says Gluba.

This was achieved by growing graphene on a copper foil, then moving it to a glass substrate and coating it with a silicon film. The experiment was performed in two different versions (generally used in conventional technologies), both with amorphous silicon and with polycrystalline silicon.

Measurements showed that silicon-coated graphene has a power conducting capacity 30 times higher than traditional zinc oxide layers. This is an important achievement that, however, still requires lots of efforts, says Gluba.

The study, published in the review Applied Physics Letters, was carried out on a sample of one square centimetre, but the scientists state it can be reproduced on larger surfaces.