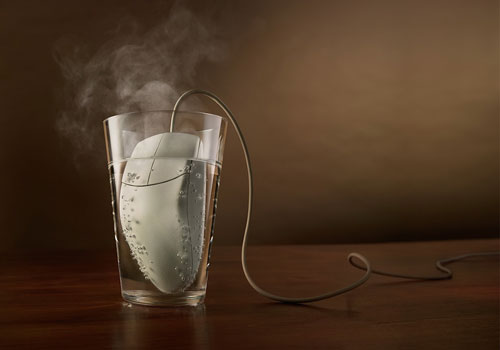 An international research team showed that a layer of graphene can reduce temperature in the hottest parts of a processor by 25%, thus increasing the electronic system’s performance and life.

An international research team headed by the Chalmers University of Technology in Sweden found that one unique property of graphene is its ability to disperse the heat produced by electronic systems. In particular, the researchers demonstrated that a layer of this innovative material can reduce temperature in the hottest parts of a processor (known as hotspots) by up to 25%.

This is an important finding, in that modern electronic systems generate more and more heat, particularly as their features are enhanced. Such heat should be dispersed in an efficient manner, because it impacts negatively both on the performance and on the lifespan of the devices. According to estimates, in fact, a 10°C temperature increase can even halve the lifespan of an electronic device.

“The normal operating temperature in the hotspots we cooled using a layer of graphene ranged from 55 to 115°C,” said professor Johan Liu, head of the research. “We managed to reduce it by 13 degrees.”

Significant benefits are also obtained in terms of energy saving. According to a study carried out in the United States (based on data collected in 2006), 50% of the energy used to power data servers is consumed by cooling systems. Solutions like this one could help reduce consumptions.

This finding – continues the professor – improves energy efficiency and extends the lifespan of the equipment, while paving the way for more features and allowing to move forward with electronic device miniaturization.

The study was carried out in cooperation with the Hong Kong University of Science and Technology, the Shanghai University, and the Swedish company SHT Smart High Tech AB.

Click here to read the abstract of the study.