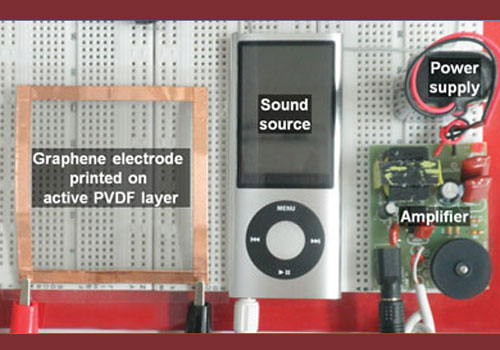 The device, created by researchers at the Seoul National University (Korea), seems to provide cost and energy savings compared to similar available technologies.

Researchers at the Seoul National University used a few graphene sheets to create a transparent, supple, ultra-thin loudspeaker that – they claim – could be applied to windows or computer screens.

Due to its surprising mechanical and electronic properties, graphene (made up of a single layer of carbon atoms) is bound to revolutionize technology. However, producing large-sized films with this innovative material is still a major challenge for scientists.

To overcome the barrier and produce the device, the Korean research team, headed by Jyongsik Jang, used an ink-jet printer to “print” graphene oxide on a PVDF (polyvinylidene-fluoride) substrate. By doing so, the researchers obtained a polymeric film coated with two layers of graphene working as electrodes.

This innovative process allows to produce large-sized graphene films in a controlled manner and, potentially, on a large scale, suited – according to this trial – to produce thin, supple, transparent loudspeakers.

But how does the system work? When a current originating from the sound source is applied to the device, a reverse piezoelectric effect is triggered, which warps the PVDF film and creates sound waves.

According to the researchers, such system would be easy to install and use wherever sound diffusion is required.

While similar loudspeakers are already available on the market – notes Jang – the new device could offer significant savings in terms of energy consumption and production costs. However, concludes the expert, lots of efforts are still required to improve sound quality and reduce prices in view of the commercial launch.

Click here to read the abstract of the article.