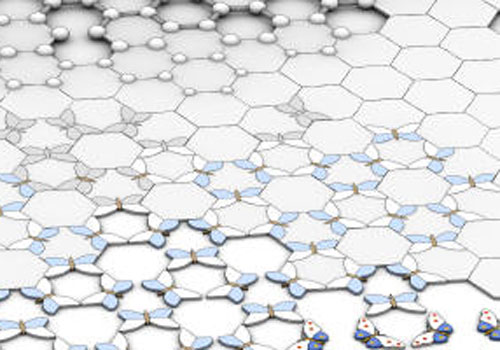 The discovery was published in Nature by two independent research teams coordinated, respectively, by the Manchester University and the Columbia University.

A new important discovery involving graphene paves the way towards the creation of new super-materials. Following binding with layers of boron nitride (also known as white graphene) and the application of a magnetic field within the graphene lattice, researchers at two distinct universities (Manchester University and Columbia University) recorded an empirically unprecedented change in electronic properties, which could pave the way towards unique technological applications.

The energy leaps of electrons, at the above-described specific conditions, follow a butterfly pattern repeated on a scale. While the existence of a fractal structure in the energy levels of the electrons had been assumed almost forty years ago by US physicist Douglas Hofstadter, no one had ever succeeded in finding experimental evidence.

Observing this special effect – known, in fact, as “Hofstadter’s butterfly” – is a unique achievement in the study of quantum phenomena, as well as – particularly – in the ability to manipulate graphene and its amazing conductive properties.

It should be noted that graphene, a two-dimensional lattice made of individual carbon atoms, has very high electric conductivity, thousands of times higher than copper’s, due to the dynamics of electrons moving within the honeycombed structure at light speed, as if they had no mass.

This finding points out to potential innovative applications in the field of electronics and demonstrates – according to Andre Geim, Nobel Laureate in 2012 for the discovery of graphene and co-author of one of the two published studies – that new types of materials can now be generated by stacking individual sheets of atoms in the desired sequence, obtaining artificial crystals that would have been impossible to produce until few years ago. This is an important achievement, continues the Professor, which lays the foundations to develop even more significant studies than those on graphene.

The Editorial Staff
Published on Wednesday, May 29, 2013