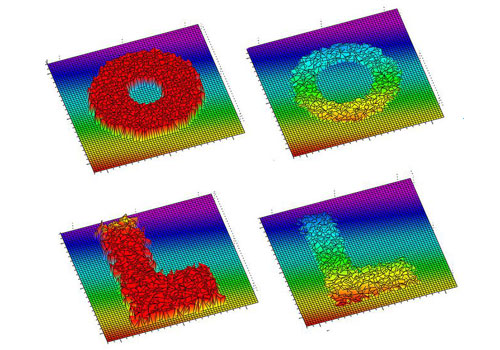 Three-dimensional DNA structures allowed researchers at the Harvard University and the MIT - Massachusetts Institute of Technology to shape and cut graphene at low cost for the first time. This achievement could promote the production of super-fast and efficient computer chips.

Using the unique conductivity and strength of graphene, researchers could create groundbreaking computer chips capable to work much more quickly with lower energy consumption. However, some limits of the material need to be overcome to produce such innovative processors.

In fact graphene, in its base form, is not a semiconductor, and is more difficult (and more expensive) to process compared to silicon, currently used in electronic circuits. In order to address these challenges, chemists and engineers at the Harvard University and the MIT – Massachusetts Institute of Technology designed a new low-cost technique that allows to “shape” and transform graphene into a semiconductor using DNA. How?

Researchers assembled individual DNA filaments, like Lego blocks, to create three-dimensional figures similar to small moulds, designed to shape graphene. As many as 102 different shapes were created by changing the filament assembly.

The moulds were then fixed to a graphene surface using a molecule called aminopyrine, whose structure is very similar to the innovative material. Then, after stabilizing the DNA mould with a layer of silver and a layer of gold, the scientists burned the surplus graphene generating a cast almost identical to the mould (which was promptly removed using sodium cyanide).

Thus graphene symbols, rings, and stripes were obtained. The latter were particularly interesting, because the material, thus shaped, acquires new properties, including semiconduction, and is therefore potentially fit to substitute silicon in future electronic circuits. Now researchers intend to improve the technique to reach the standards of higher cost processes. The details of the study were published in the review Nature Communications.