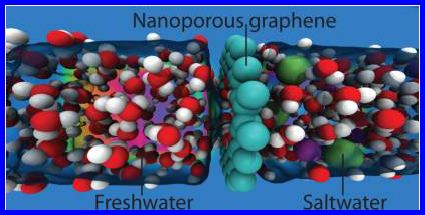 Researchers at the MIT – Massachusetts Institute of Technology used graphene to design a new technology to cut the financial and energy cost of water desalting and purifying processes. The study was published in the review Nano Letters.

Ultra-thin graphene filters capable to desalt and purify sea water in a much more effective, cheap, and eco-sustainable manner compared to current technologies are part of the revolution initiated at the labs of the MIT - Massachusetts Institute of Technology in Boston, which could help significantly increase the amount of freshwater available in the world’s regions where reserves of this valuable resource are scarce.

The systems in use for this purpose to date are too expensive – both in economic and in energy terms – for widespread use. Thus researchers at the MIT, headed by David Cohen-Tanugi and Jeffrey Grossman, tried to improve the desalting process by acting on materials.

The innovative system introduced by Grossman and Cohen-Tanugi, based on water filtering through the nanopores in graphene, addresses this problem. Graphene is, in fact,1000 times thinner than the materials in use to date, and works hundreds of times more quickly at equal pressure, says David Cohen-Tanugi. Alternatively, it performs similarly to the existing systems, however at a much lower pressure, thus sharply reducing the economic and energy-related cost of the process, say the authors.

Read the pdf of the study published in the review Nano Letters for more information.