THE WORLD’S THINNEST GLASS DISCOVERED BY CHANCE WITH GRAPHENE 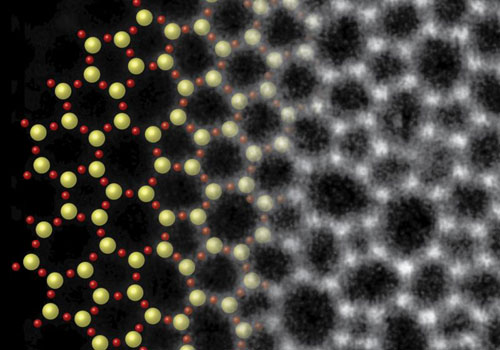 Discovered by chance on a layer of graphene by researchers at the Cornell University and their peers at the Ulm University in Germany, the “record” glass sheet is only two atoms thick.

Some important discoveries occur by chance. It recently happened to researchers at the Cornell University that, in co-operation with their peers at the Ulm University in Germany, found the world’s thinnest glass sheet (only two-atoms thick) by mere chance.

They did so by observing with the microscope a flaw on the pure graphene they were producing artificially. What looked like simple “dirt” proved to be a structure made of silicon and oxygen, the elements that make up common glass.

According to the team, the ultra-thin glass sheet is likely to have been formed by an air leak, which may have brought about a reaction between the copper foils used as a substrate to grow graphene and the quartz in the furnace used for the production process (also made of silicon and oxygen).

“While this is important news, the discovery allowed to answer lots of questions on the fundamental structure of glass that had been pending for over eighty years,” said David A. Muller, professor at the Cornell University. For the first time in history, in fact, the researchers managed to photograph the layout of glass atoms, and found that the resulting image is surprisingly similar to a theoretic representation drafted in 1932 by Norwegian physicist William Houlder Zachariasen.

This innovative product has a broad variety of potential applications, and some day could improve the performance of computer and smartphone processors. The finding was published in the scientific review Nano Letters (click here to read the abstract), and will be officially included in the 2014 edition of the Guinness book of records.