A JOURNEY THROUGH THE UNIVERSE OF GRAPHENE 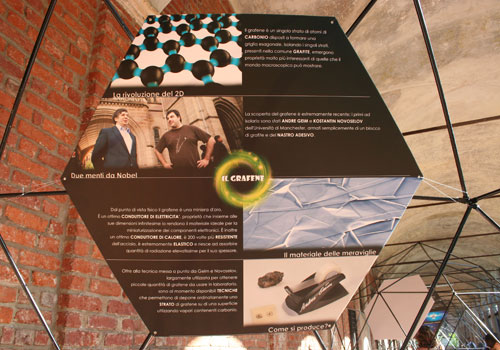 What is it? How is it produced? And, particularly, how will it change our future? These and other questions are provided a clear and straightforward answer by the show “Graphene: how 2D future will change our life,” now at the Milan State University until July 3.

Graphene has unique properties: it is the thinnest and lightest material in the world (only one-atom thick), 50 times stronger than steel, yet ultra-flexible, transparent, as well as an excellent power and heat conductor. With these assumptions, graphene sets out to bring about the technological revolution of the next few years, which will result into the creation of devices worthy of a science-fiction movie. Graphene has countless applications, some of which can hardly be imagined, in the fields of electronics, biomedicine, energy, as well as mobility and architecture. The prestigious review Nature even imagines an age of graphene, whose impact would be comparable to the Bronze and Iron age.

Graphene, often called “wonder material”, is the subject of the show “Graphene: how 2D future will change our life,” promoted by Collegio di Milano (a high-level institution attended by some of the best students from Milan universities) and the Research Centre for Applied Sustainability of Goldmann & Partners. The initiative is aimed at disseminating and expanding the knowledge of graphene, its nanotechnological applications (with a positive impact also in terms of sustainability), and some of the possible socio-economic and institutional implications of the adoption of this technology.

The exhibition was designed by 12 students from various departments of Collegio di Milano, who studied the subject in-depth for six-months each starting from his or her baseline training (architectural, economic, legal).

The installation – open to the public at the Largo Richini colonnade of the Milan State University (via Festa del Perdono 7) until July 3 (except on Saturdays and Sundays) – is simple and straightforward. Eight numbered panels, with images, texts, and graphics, are displayed in pairs inside small webbed domes accommodating just a few visitors at a time.

The tour starts with an immersion into the world of nanotechnology, of which graphene is a major player. Nanotechnology is the branch of applied science and technology that studies matter at a very small scale (just consider that a nanoparticle is one million times smaller than an ant), and aims at miniaturizing existing materials (because the same materials with different dimensions also have different properties). Graphene – a single layer of carbon atoms arranged to form a hexagonal lattice, with much more interesting properties than those offered by the macroscopic world – stands out as a major player in this context. It was first obtained by Konstantin Novoselov e Andre Geim, two young Russian researchers of the Manchester University, by isolating individual sheets from a block of graphite using common Scotch-tape. Both scientists later won the Nobel Prize for physics for their studies on this material.

The tour continues with an overview of the players involved in the “graphene revolution” and their role in the near future – from governments, in charge of establishing the necessary conditions for innovation with funding and company support, to university labs, strengthened by cooperation among different think tanks and by synergy with start-ups and spin-offs. In this respect, Italy participates to this entrepreneurial innovation with Directa Plus, a start-up that is well-prepared to enter the world market with its products based on graphene nanoplatelets (an ultra-thin dust made of nanometric chips of graphene for mixing with other materials).

The show goes through the context from a geopolitical and economic viewpoint. Thus we find that the production of graphene only requires small amounts of graphite, a common material widely available on the market. Sales, in fact, amount to 1.2 million tons per year, at US$2,500 per ton (just think that copper costs as much as US$8,000 per ton). Therefore the “yield” of countries with raw material deposits can be reasonably expected to decline in favour of those that boast higher technological skills. Accordingly, Europe recently launched the super-project Flagship Graphene (the most ambitious ever), which provides for a 1 billion EUR investment to support a 10-year research on graphene. At present, though, the record of patents filed in this area belongs to China (as many as 2204, vs. a mere 200 in Europe). One reason is that the law on the issue is much more flexible in China than in Europe.

The tour ends with a description of the possible applications of this innovative technology: from higher-yield photovoltaic panels to paints to protect walls from moulds and microorganisms or to super-powerful filters to purify polluted water or clean the sea, for example following hydrocarbon leaks from oil platforms. Moreover, graphene will bring about a 10-fold increase of the performance of transistors compared to silicon ones, and will allow to store hydrogen, create flexible roll-up touch screens and supercapacitors for electric cars capable to recharge 1000 times more quickly than ordinary batteries, as well as devices to analyze the whole human genome in few hours or to integrate perfectly into our nervous system to treat degenerative diseases, repair damaged tissues, or even enhance our senses. Watch the photo gallery to go through the whole show.

Goldmann & Partners has embarked on this educational activity with Collegio di Milano within the framework of the ATANOR project, an initiative of the Lombardy Region dedicated to the development of cross-functional graphene-based polymeric materials.