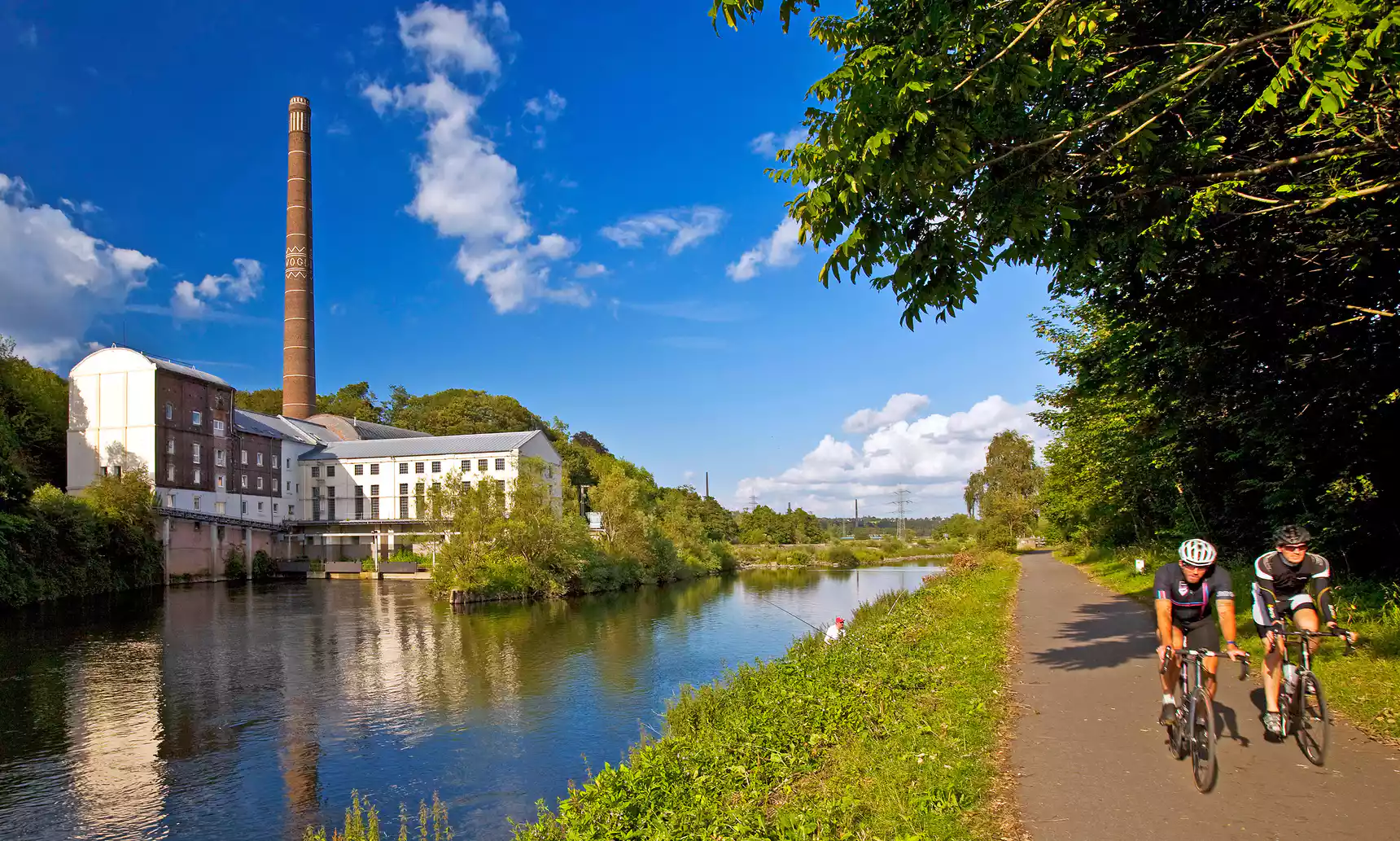 The German city is working to shake off the coal dust of the industrial Ruhr, but will green tourism be profitable enough to regain its former economic strength?

The shores of Baldeneysee, a ribbon of a lake that feeds into the Ruhr river near Essen, are busy. Schoolchildren cannonball into the water as sunbathers sit on beach chairs, nurse their beers and watch the paddleboarders pass by.

It wasn’t always like this. “When I was a little boy in the 70s, every morning we used to sweep coal dust and ash off our window panes,” recalls Frank Martini, an Essen resident. “Emissions from the furnaces and ovens of coal and steel industries stained our clothes left outside to dry.”

The Ruhr river has been at the heart of environmental debate in Germany since the 1960s: coal and steel mining, which fuelled the Germany economy, also eroded the Ruhr’s water quality. But it has now been certified fit for swimming by a team of marine biologists and aquatic ecologists in the Sichere Ruhr (Safe Ruhr) project. At long last, 46 years after it was closed for swimming, this section of the Baldeneysee has reopened.

It is a major victory for Essen in its long-running fight against the environmental degradation that made it a wealthy city in the first place. Known as a Graue Maus (grey mouse) after its once-prominent coal industries, Essen used to be the face of industrialisation in Germany. Its coal mines, iron and steel plants generated as much revenue as they released emissions and effluents into the air and water.

After 46 years of a bathing ban, the Baldeneysee lake is now open for swimmers. Photograph: Jochen Tack/Alamy

The coal mines closed in the 1980s; the last remaining active mine, Prosper Haniel, is likely to shut by the end of 2018. However, they left behind a profound effect on Essen’s environment: dirty water and unbreathable air.

The slow revival of its water bodies has been key to a surprise decision this year by the EU to name Essen its European Green Capital. The city deserves the honour; its efforts to improve green spaces have resulted in improved green infrastructure. The urban redevelopment project Gruene Mitte (Green Centre), characterised by waterbodies, greenery, a new inner-city estate and a park, was launched at the place of a former goods station, while the 100km-long bicycle highway, RS1, cuts through the heart of the city.

A city-funded urban gardening project, Gemeinschaftsgrten, now has 10 community gardens. In five years the project has spread across Essen, bringing together enthusiasts and people without outside space to grow vegetables on a share-what-you-grow basis. Sabine Baetz, who grew up in Stoppenberg, very close to the prominent coal mining area, volunteers at one of the gardens in the Holsterhausen neighbourhood. She marvels at the change. “In 2007, I was given a half-hour flight ride over Essen by my then-boyfriend as a birthday gift. The city’s green cover looked spectacular from above.”

The largest of Essen’s disused coal mines, the Zeche Zollverein, is now a Unesco world heritage site and open for public viewing. The skeletal remains of the once flourishing mines and its coking plant watch over fresh construction: a housing project taking over part of the former plant. The coal washing complex is now the site of the Ruhr museum. Leafy Koln Mindener street, once a hive of activity, is now left to ruminate in the relative tranquility with only the rumble of the occasional car zipping by.

The tarred roads that once transported coal consignments are now open for cyclists, in a programme called Route der Industriekultur (route of industry culture). The route stretches 400km past highlights of the 150-year-old industrial heritage: most of the factories abandoned, a few preserved like the Zollverein.

“In its heyday, while the industries powered the city and the country’s economy, the Ruhr region even provided funds to other states that were only agrarian – like Baden Wrttemberg and Bavaria,” says Oliver Zllner, a professor of media and sociology.

“A kind of economic apartheid cleaved the city into two when it was prosperous,” he recalls. While the rich lived in upscale southern neighbourhoods such as Margarethenhhe, replete with row houses and tree-lined avenues, the poor were relegated to the northern neighbourhoods of Gelsenkirchen or Katernberg, where they lived in miners housing close to the collieries. When the mines shut and unemployment rose, labourers who couldn’t find alternative employment were pushed into what Zoellner calls “inter-generational inherited poverty”.

The city had no choice: it had to reinvent its economy. “The former industrial metropolis, where work never stopped,” write Reinhard Felden, Wolfgang Kintscher and Matthias Maruhn in the book Essen, “embarked on its transformation from a coal and steel metropolis into a commercial and high-tech centre.”

The coking plant Zollverein in use. Photograph: Ullstein Bild/Getty Images

Although it has made much of its newly green status, Essen still powers the country: the German energy company STEAG (which has a mix of coal and renewables) and the gas company OGE are both located in Essen. Recently, the energy companies e.on and RWE both opened renewable energy divisions in the city, their concrete and glass high rises providing a modern touch to the postindustrial skyline. And even as steel plants relocate to cheaper global destinations such as Brazil, Thyssenkrupp – which has shaped the economy here since the company founded its steel business in 1811 – recently decided to move its main headquarters to Essen. (It has since been taken over by the Indian steel producer Tata.)

“Services and academia are reshaping the economy in a minor way, too,” argues Zllner. The city has two universities and a student population that fuels retail: a recent report shows increased footfall in Essen’s shopping districts. Businesses frequently attempt to capitalise on its brand reputation as “desk of the Ruhr”, a moniker that it shares with Dusseldorf and was reinforced by Thyssenkrupp’s move.

These efforts are yet to show a marked improvement in the city’s economy, however. Unemployment in 2017 remains at 11.1%, little change from a 2015 report that had it at around 12%.

“There is still not a lot of scope for employment here in Essen because the city has no startup scene that fosters entrepreneurial talent,” says Karolina Warkentin, a journalism lecturer. She says the students at Essen’s prominent university, Duisburg-Essen, leave for other cities such as Berlin as soon as they finish their studies. “To prevent the student talent drain, the government is promoting rental subsidies on co-working spaces so as to encourage startups to take root.”

But as the environmental degradation is successfully arrested, the greenery of the beautiful German countryside – with possibilities for river cruises in the Ruhr river and its tributaries like the Baldeneysee – is inspiring the city to turn to tourism to reclaim its economy. That idea was given a shot in the arm with Essen’s naming as European Capital of Culture in 2010; seven years later, there is hope that the green capital win could keep the tourism momentum going.

“We are expecting a boost to the tourism economy this year, too. Our target is to hit the 500,000 visitors mark,” says Simone Raskob, who leads the city’s European Green Capital team. The opening of Baldeneysee to swimming could help – shacks on the beach now serve cocktails and beer, and many expect more parts of the Ruhr to open next.

Though it has revived its environmental fortunes, it is yet to regain its economic strength. “Essen has shaken off the coal dust of the industrial Ruhr,” write the authors of Essen. That may be true – but it has yet to find anything as profitable underneath.

This is the dawning of the Age of Graphene, the new material of the future at the focus of scientific research in major think tanks world-wide. Ecological, extremely versatile, cheap, it may soon be at the core of applied sustainability.